Whether you're mountain biking, road riding in remote areas or camping, there's a chance you'll encounter wild animals, such as mountain lions, bears or snakes. While attacks are extremely rare, it's best to be prepared. Here's how:

General precautions: When an area is inhabited by large predators (ask locals before riding there), it's best not to ride alone. Keep in mind that most animals want to avoid you as much as you want to avoid them. So, to prevent startling animals make noise by talking, singing or shouting. If a cougar or bear hears you coming, it's likely to flee, which is best for you and the animal.

Know that twilight, night and dawn are when most animals are likely to be active, although encounters can occur at any time. Be especially cautious around animals with their young. And, if you spot a baby alone, it's highly likely that Momma's close by and she's sure to be extremely protective.

No matter how innocent an animal appears, give him as wide a berth as possible. Even normally docile animals, such as bull elks in rut and deer bucks in fall can be very aggressive. Smaller animals, such as coyotes, wolves and wild dogs can be extremely dangerous, too, if they're traveling in a pack. So, leave bear-baiting and crocodile wrestling to the nuts on television who get paid a bazillion dollars to risk life and limb! 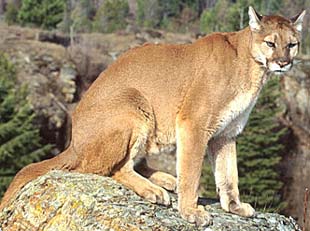 These big cats are also known as pumas, cougars, catamounts and panthers. Experts suggest you take the following actions to avoid these creatures and minimize the likelihood of an attack if you DO come across one:

Stop! If you encounter a mountain lion, STOP! Do not attempt to ride or run away. Attempting to flee may stimulate a lion's instinct to chase and attack. Face the lion and stand upright. Back away from the animal slowly, only if you can do so safely.

Stay calm! Stay calm when you come upon a lion. Talk calmly, yet firmly to it.

Do not crouch or bend over! A person squatting or bending over looks a lot like four-legged prey so do what you can to appear larger. Raise your arms. Open your jacket if you're wearing one. One mountain biker in Colorado successfully warded off a mountain lion by raising his bike over his head. Stay calm and face the lion.

Throw Stuff! If the lion behaves aggressively, throw stones, branches, water bottles or whatever you can grab without crouching or turning your back.

Fight back if attacked! People have successfully fought back with rocks, jackets, sticks and bare hands. Because a mountain lion usually tries to bite the head or neck, try to remain standing and facing the attacking animal. 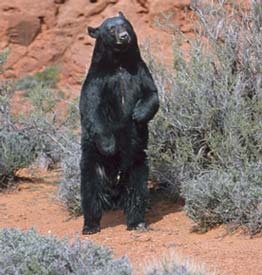 Wild bears rarely attack unless threatened or provoked. Because bears behave differently under different circumstances, there are no precise rules about what to do if you encounter a bear. The measures listed below are generally effective and are your best bet for minimizing trouble.

Talk! While some cyclists may use bells for noise, talking carries better, and bells may arouse a bear's curiosity. Use extra caution when traveling into the wind and near streams, as these factors can limit the bear's ability to hear or smell you.

A bear stands up (photo) to better identify what you are, not to threaten you.

Calmly back away! If you see a bear, dismount and calmly back out of the area while talking loudly in a soothing voice to make it aware you are there and are moving away. Most bears will leave when they see or hear you. The bear may also suddenly rush forward and stop as a "bluffing" tactic to intimidate you to leave. Momentarily hold your ground, then keep backing away and talking softly.

Shake or snap! If you cannot change your route to avoid a bear, try shaking leafy branches, snapping small downed limbs with your feet, and talking in a loud but low tone. Bears often communicate their discomfort at being too close to one another by snapping small branches. You may need to do these things repeatedly before they have any effect.

Do not flee or scream! If a bear approaches you, do not scream, try to ride off or make sudden motions. You cannot outride a bear, and screaming may increase the danger of the situation.

Drop something! If a bear approaches you very quickly, drop a glove or bandanna (don't drop anything associated with food) and move away without running. The bear may stop to examine what you've dropped, distracting it from you.

Fight back if attacked! If a black bear attacks you, fight back with rocks, sticks, equipment, or your bare hands if nothing else is available. Aim for the bear's eyes or nose.

Or: A grizzly bear with young or protecting a food source may want to make sure you're not a threat. People have weathered grizzly attacks by dropping into a "cannonball position" with neck and face between the knees. If the bear takes you out of this position, try to resume it. Usually, the bear will see that you are not a threat and will leave you alone. Do not take the offensive against a bear with cubs.

Bear repellents (such as pepper spray), even when effective, only work at such close range that depending on them could endanger you and should only be used as a last resort. 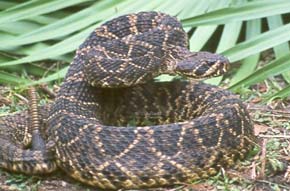 According to the New England Journal of Medicine, every state but Maine, Alaska and Hawaii has at least one of 20 poisonous snake species. And snakes favor trails for sunning themselves.

They're yet another reason to be careful rounding blind corners. You may not have enough time to stop before you're on top of them. Here are precautions to lower the risk of being bitten:

Leave snakes alone! Many people are bitten because they try to kill a snake or get a closer look at it. Tossing a small object like a pinecone or pebble at the snake should convince it to move on.

Stay out of tall grass! And remain on the trail as much as possible.

Keep hands and feet out of areas you can't see! Don't pick up rocks, logs or firewood unless you are out of a snake's striking distance. Avoid reaching into cracks and crevices of rock formations. A snake can strike half its length.

According to the American Red Cross, if a rider is bitten, these steps should be taken: